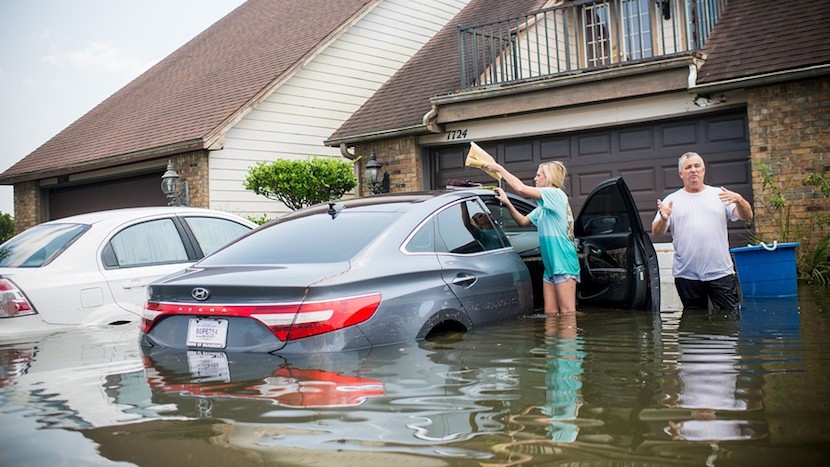 There’s Water In My Car!

Typically, car flood damage occurs in one of three ways:

In the first two situations, the car was likely parked and unattended for a prolonged period of time. Removing the water inside the car feels like the best thing to do. However, the first thing to do is taking photos prior to touching the car. It is likely recommended to wear plastic gloves to avoid direct contact with the water. The water inside the car is likely polluted with other elements flooded within the immediate area such as fuel and pesticides. And depending on how deep the water level is, there could be more unknown objects hiding in the murky water. If water has exited your car by the time you inspect it, take photos of the water levels. The best areas to capture water level photos inside your car is on the interior door panel, lower seat cushions, and center console if the water level reached that high. A thin layer of dirt or grim should be found and slight discoloration is usually found. If your vehicle has lost power, do not under any circumstances attempt to start your car. This may cause additional mechanical damage to the starter and even the engine.

In the third situation, the water level in the flooded intersection or street you attempted to cross exceeded your car’s drivetrain components (wheels, axel, and transmission). The water entered and likely submerged the engine bay causing the car to instantly seize. Car parts are made to withstand the elements including water ala rain and melted snow. However, most mechanical components are not made to be completely submerged. Moving parts such as gears, pulleys, and pistons may use gasoline or oil to properly move. However, water does not contain the viscosity needed for these parts to power through for more than a second or two, if that.

The easiest daily life example is when your cell phone gets wet. If you spill some water on the screen, simply wiping the liquid off the screen does the job. However, if you drop your phone in a sink or toilet and grab it as soon as possible, those few seconds of being submerged could ruin your phone. Now imagine dropping your phone in a sink or toilet without knowing it and finding it hours later. It’s time to start cell phone shopping.

In all three situations, the damages should be considered severe, require professional assistance and reviewing your car insurance policy coverages should be your next step.

If the damage took place from a major rainfall event, your car is very likely was one of many severely affected by the event. When filing the claim, provide the exact time, location, and duration of where the car was parked or driven when the car seized is critical. Once an adjuster is assigned, they will likely request the photos taken to be emailed for review. The majority of insurance carriers will send a field adjuster to inspect the car to determine the expected water level. The higher the water went, the more likely your car will be considered a total loss.

Flood damage is just as a catastrophe as fire damage and frequently, it can be worse. How? Flood mechanical and electrical parts often appear undamaged until a diagnostic is completed. The problem with flood damage is you cannot physically see where the damage starts and ends. Error codes found during a diagnostic test can lead to a multitude of possible causes. The test may generate an error for each and every damaged component. One faulty part can create multiple errors and so forth. And replacing one part can remove current error codes then add new ones. Flood damage oftentimes lead to piece by piece mechanical and electrical repairs.

Insurance carriers will attempt to dry out interior damage typically thru an ozone generator device. Ozone is a natural air cleansing agent found in nature. Ozone breaks down odor-causing compounds, thereby removing the objectionable odor. However, this process usually takes multiple runs and each attempt can cost $300-$500. And even after ten treatments, the smell of mold may still occur. As cars become more advanced, car seats are built with airbags and sensors. These parts are typically only available as a complete car seat assembly. A driver car seat assembly can cost upwards of $3,000!

Under no circumstances should anyone attempt to repair a flooded car without a trusted professional inspection. Since flood damages can go from small to major, insurance carriers tend to total flood cars base on water levels. If you live in a flood-prone area, make sure you have comprehensive coverage on your policy. And if you don’t, consider adding it!